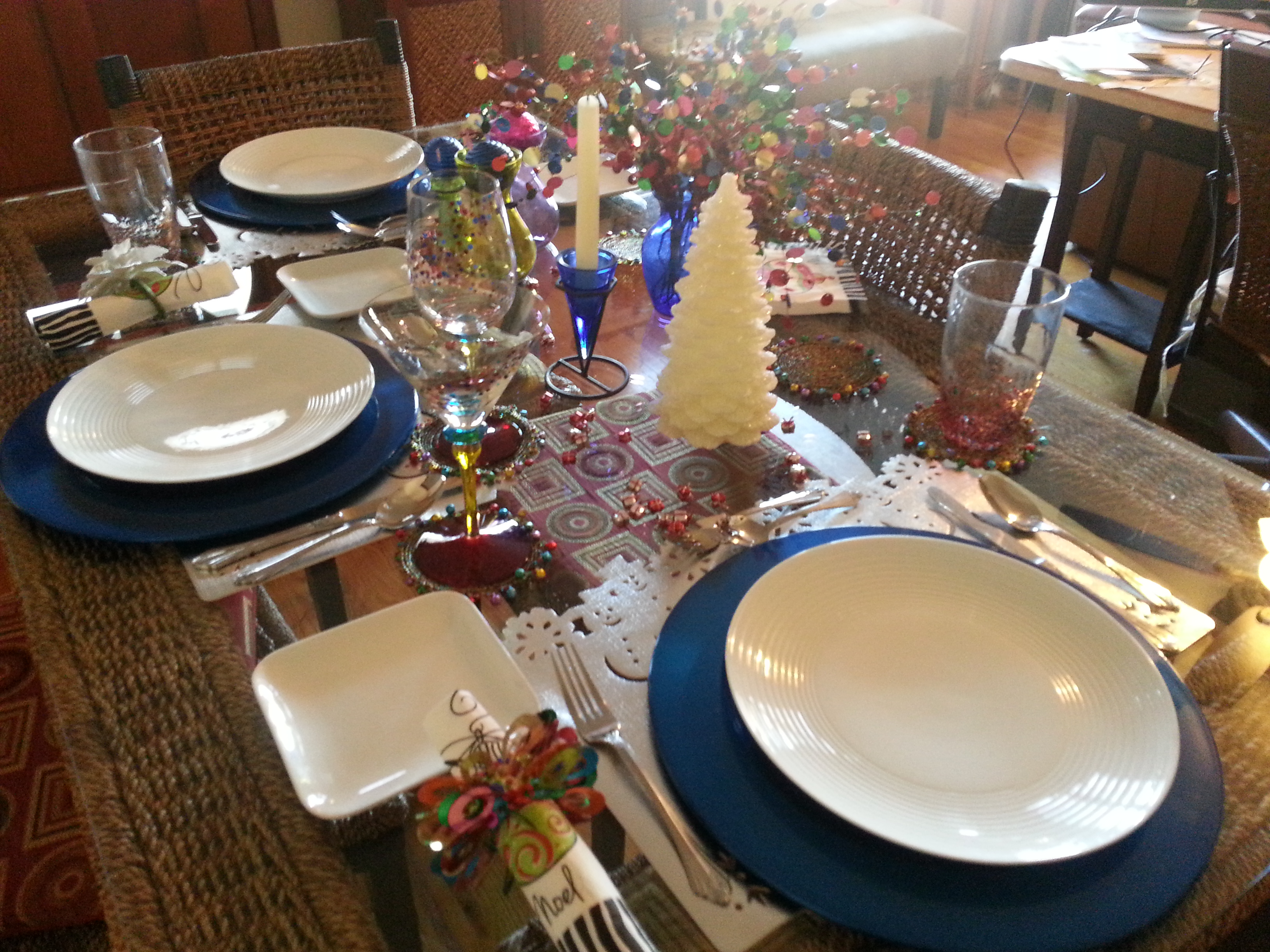 If I said I could not wait to spend Christmas alone, what would you think?  Is it your worst nightmare or your best Christmas ever.  For me it started last year in 2013.  Exhausted from a year of work in a new job with virtually no days off, renovating a house, decorating every room for my most favorite time of year, entertaining, being ditched by our mom in order to spend Christmas with her new husband, it was a time of great transition.  I needed one single solitary day to be alone…with God.

On Christmas morning I sat by the fire and communed with the King.  No chaos, no presents, no disappointment, complete calm as He revealed to me what He wanted me to know.  It was so completely glorious I knew it would be an annual tradition – this special sacred day with Him alone.

This year I was ready.  At 6 am I awoke and read several translations of Luke 2.  A few hours later I got up and heated up the most delicious leftovers from our new Christmas Eve tradition of breakfast at night.  There were gingerbread pancakes, omelet cups, brown sugar pecan bacon, eggnog pancakes, chipped beef on toast,  fresh fruit, hot bold rich coffee, and a plate of Christmas cookies and candy all made by my sister. 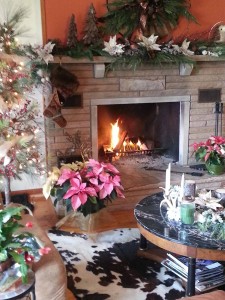 I built a roaring fire, turned on the lights of my scrawny Florida Christmas tree and commenced to commune with the King.  It is a wild goose chase with Him.

I read something and it gets me thinking and then I look it up in five other bible translations and I am richly rewarded as I contemplate all the ways to say something.

Pandora is tuned to Christmas Choral Classics throughout Christmas morning as I listen to all the songs that are sung in church.  I never went to church much as a kid, but somehow I must have visited on occasion, because I know all these songs.  I pulled out a hymnal that I had permission to lift from my first church in Florida and could not believe the truth in the words that I used to sing by rote.  Never really knowing or listening to the actual words. 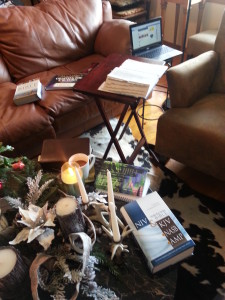 I read more and I get curious and Google something that I never knew about and we are off and running.  Today I was drawn to the book of Luke.  I started reading about Luke the author and was fascinated.  He was not even a first-hand witness to Jesus, he simply interviewed everyone who was and wrote a detailed story of Jesus’ birth, life, teaching and ministry.  He challenges us to draw our own conclusions about Jesus but reminds us it is a life and death decision to accept Christ as the Messiah. We are one breath away from where we will spend eternity.

As I read, I felt compelled to write.  I apply the lessons of those who lived so many years ago to my own life.  If we know how God acted in the past, we are sure of how He will act in the future.  I bank on this every day.  His promises are the same yesterday, today and tomorrow.  All the prophecies have come true in terms of who Jesus is.  I must believe the prophesies about His second coming and prepare others to be ready.

So Christmas Day 2014 was about the back story to the birth of Jesus.

Luke was a Gentile, he was a doctor and a writer.  He was not an eyewitness to Jesus, but it was his vital role to accurately record the eyewitness accounts.  He presented the foundations of Christian belief and they have been shared with others for generations.  He gave a complete account of Jesus’ birth, life, teaching and ministry.  Investigate the first hard eyewitness accounts and draw your own conclusions about Jesus.  It is a life and death decision.  You are only one breath away from where you will spend eternity.

Theophilus means “one who loves God.”  Luke refers to Theophilus not only as a friend but to all who love the Lord.  He was most likely a Roman friend of Luke’s who helped finance the writing of Luke’s book.  Luke was a keen observer, exact in recording details – a thorough and investigative reporter.  Luke’s gospel account records historical truth and will show you how God acted in the past so you are assured of how God will act in the future.

Luke 1:1-4 Many have undertaken to draw up an account of  the things that have been fulfilled among us just as they were handed down to us by those who from the first were eyewitnesses and servants of the word  With this in mind, since I myself have carefully investigated everything from the beginning, I too decided to write an orderly account for you most excellent Theophilus, so you may know the certainty of the things you have been taught.

And so the story begins.  Think of the originality that went into the first Christmas…no one but the creator would have scripted it that way.

Mary – she didn’t expect to be pregnant.  Joseph – he didn’t expect an angel to tell him to marry her anyway.  The Shepherds didn’t expect the night shift to be anything unusual.  God enters our lives in the most unexpected ways – but always with a perfect plan.

A childless couple conceived in their old age.  A priest named Zechariah and his wife Elizabeth were upright in the sight of God.  They observed all the Lord’s commands and decrees blamelessly.  But yet, they were childless.  Zechariah and Elizabeth were faithful to God yet they were suffering.  Childlessness was considered a curse.  They felt humiliated and hopeless.  But God was waiting for the right time to encourage them and take away their disgrace.

An angel, Gabriel, appeared to Zechariah telling him not to be afraid.  Your prayer has been heard.  Your wife Elizabeth will bear a son and you are to call him John.  He will be a joy and a delight to you and many will rejoice because of his birth.  For he will be great in the sight of the Lord.  He will bring back many of the people of Israel to the Lord their God.  He will herald God’s arrival in the style and strength of Elijah – he will get the people ready for God.

And Zechariah’s first response to the angel “Do you expect me to believe this.  I am an old man and my wife is an old woman.”  And the angel said “I am Gabriel sent by God to bring you this glad news.”  And because Zechariah did not believe the angel of God, God made Zechariah unable to speak until the day of John’s birth.  Just like a man to be such a skeptic.  Oh Zechariah, when God sends an angel, do not doubt.  Nothing is impossible with God.  Prepare for punishment when you disobey.

When Elizabeth was six months into her pregnancy, God sent Gabriel out again, but this time to the town of Nazareth in Galilee.  Mary was a virgin engaged to be married to Joseph.  The angel Gabriel greeted Mary.  “Good morning.  You are beautiful with God’s beauty – beautiful inside and out.  God be with you.”  Mary was very perplexed at this statement and she kept pondering what kind of salutation this was.  The angel said “don’t be afraid Mary.  You have found favor with God.  You will become pregnant and give birth to a son and call him Jesus.  He will be great and will be called Son of the Most High.  The Lord will give Him the throne of this father David.  He will reign over Jacob’s descendants forever, no end ever to His kingdom.”

Mary asked the angel how this could be as she was still a virgin.  The angel said “the Holy Spirit will come upon you and the power of the Most High will overshadow you like a shining cloud and so the holy, pure, sinless offspring which shall be born of you will be called the Son of God.”   “And listen,” the angel said “your cousin Elizabeth in her old age has also conceived a child, a son and she who was barren is now in her 6th month.  For with God nothing is ever impossible and no word from God will be without power.”  Then Mary said “Yes, I see it all now.  I am the Lord’s servant.  Let it be done to be according to what you have said.”

Mary did not waste a minute.  She went to the hill country to a town in Judea.  As she entered Zechariah’s house and called out to Elizabeth, the baby in Elizabeth’s womb leaped for joy and Elizabeth was filled with the Holy Spirit.  Elizabeth said to Mary “you are so blessed among women and the babe in your womb is also blessed.”  And then Elizabeth asked why she was so blessed that the mother of the Lord would visit her.  “As soon as the sound of  your greeting reached my ears, the baby in my womb leaped for joy.”  Blessed is she who has believed that the Lord would fulfill his promises to her.

God answers prayers in his own way and in his own time.  He works in what we humans consider impossible situations.  Prayers require divine intervention.  Trust the Lord that His ways are best and their fulfillment might just come when others think you are ready for the scrap heap.

John means “the Lord is gracious.” Jesus means “the Lord saves.” Both names were given by God, not chosen by human parents.  God saves his people.  He will not withhold salvation from anyone who sincerely comes to Him.

God’s favor does not insure success, fame or life without trials.  God indeed did bless Mary by being the mother of the Messiah but it lead to much pain.  Her peers would ridicule her, her fiancé would come close to leaving her, her son would be rejected and murdered.  But through Mary’s willingness to be used by God, her son would be the world’s only hope.  Her submission to God was all part of the plan to bring about our salvation.

If your circumstances fill you with sorrow and dim your hope – wait patiently for God to finish His work.  We know in all things God works for the good of those who love Him, who have been called according to His purpose.  God knew what He was doing from the very beginning.  He decided at the onset to shape the lives of those who love him along the same lines as the life of His son.  The Son stands first in the line of humanity He restored.  We see the original and intended shape of our lives there in Him.  After God made that decision of what His children should be like, He followed up by calling people by name.  He set them on a solid basis with himself.  And then after getting them established, He stayed with them to the end, gloriously completing what He had begun.

So what are you waiting for…get down on your knees.  Ask God into your heart.  Then be ready to go on the greatest adventure of your life.

He can use anybody.