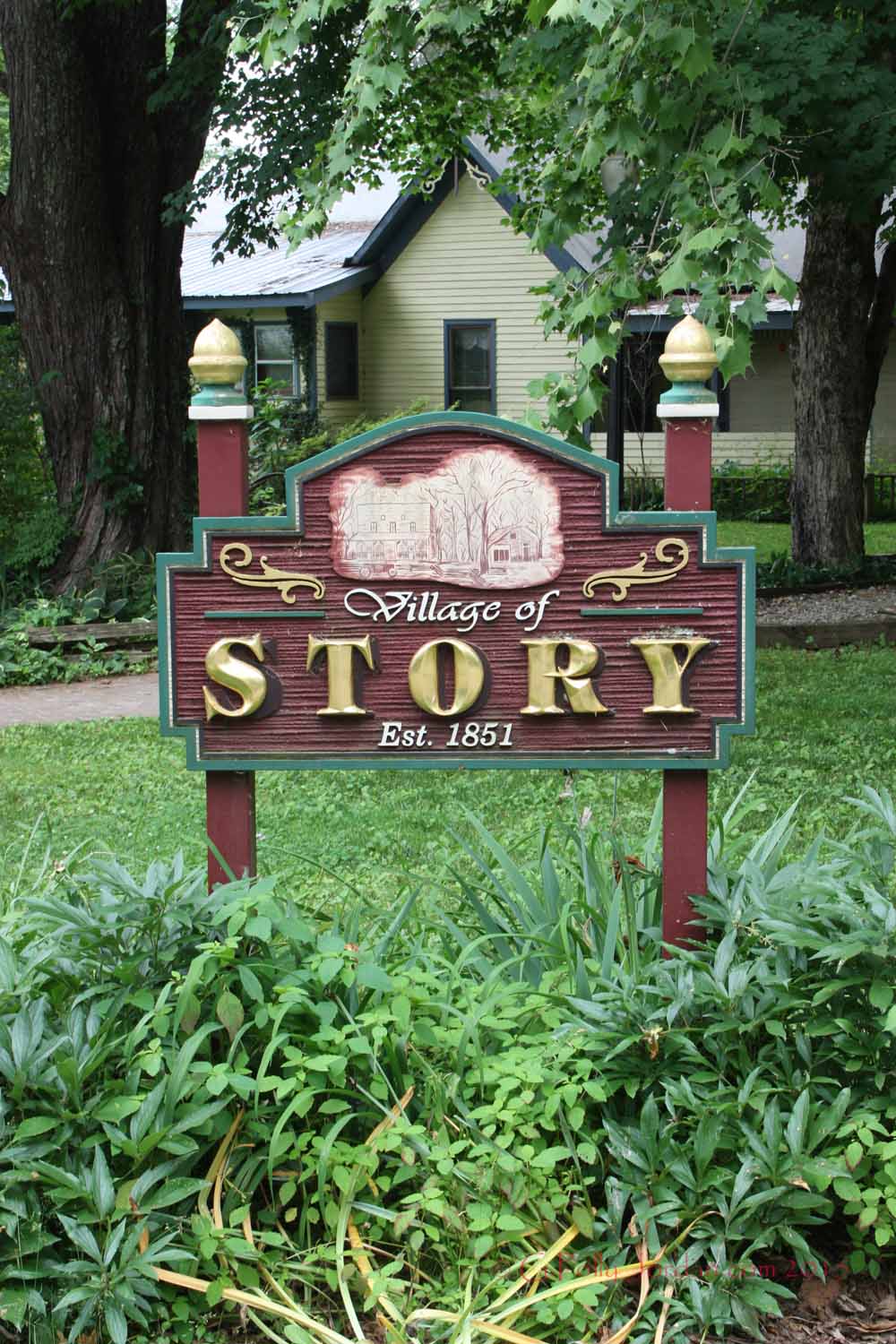 When a storyteller friend of mine invited me for a special dinner event at the Story Inn, I had to accept.  Frazzled from the bizarre twists and turns of everyday life and in need of civilized adult conversation, gourmet food and craft beverages, I was in need of this particular Friday night. Cambridge lives in a rustic cabin in the quaint little town of Nashville Indiana and The Story Inn is a short ride through the 16,000 acres of rugged hills, ridges and ravines of Brown County State Park.  Cambridge texted “Pick me up at the cabin and we will ride together through the park and cut 15 minutes off the drive.”    I picked him up in the Subaru and burning daylight, we made our way to the West Entrance of the park and meandered toward Story.  The Story Inn has been inconveniently located in the Village of Story since 1851. I am an eclectic combination of photographer and story teller and Brown County State Park is one of my favorite nature photography destinations.  As many times as I have gotten lost on the steep slopes and deep gullies of the park, I had never seen the entire horseman’s village (the largest horseman’s camp in the Midwest) we navigated through on this shortcut.  The only thing to make it more perfect would have been a foot of snow.  The Subaru could handle it with ease and some of my best shots have come from the park in a snow storm when I am the only one there.  But tonight we had dry pavement and I demonstrated the manual shifting paddles which allowed us to dive down hills without the need to apply the brakes.

A Word in Edgewise When two storytellers get together and the destination is the Story Inn, you can be sure the conversation is tantalizing.  Most of the time I cannot get a word in edgewise, but on this magical night, Cambridge quizzed me on my latest blog series.  My foster son had just appeared on the scene and had immersed himself in my life creating the same drama, challenge and adventure as he had twenty years ago when I took him in.

“Cambridge, you read the first blog.  I was praying for something immeasurably more than I could ask or imagine.  You know better than anyone, how God answers prayers and you also know what a sense of humor God has.  God sent me Robert and I am dizzy with being mom to an over-the-road trucker who even at age 41 is still a special child in need of guidance and mentoring.”

“Polly, this is not just a story, this is going to be an epic novel.  Your website describes everything you touch and do…everything is a Risky Undertaking.” As we zipped around curves and over bridges, we discussed mundane day jobs, dryers that quit drying and internet service provides who disconnect service when all you wanted was a lower rate. We pulled out of the park and a short ride down State Road 135, we arrived in Story, Indiana.  Time forgotten.  Did I mention there are only 4 permanent residents in Story? The sun was setting as we jumped out of the Subaru.  Twinkling lights illuminate the Inn.  We stepped back in time approaching the Standard Oil sign and the vintage gas pumps which adorn The Story Inn.  Cambridge is miles ahead of me as I reach for a camera to capture the mood.  The rich blue of the sky was breathtaking as the sun illuminated the barren trees.  Oh how I love Winter in Nashville.

We are early.  Cambridge has never been early in his life. He ushers me downstairs to the Story Still, a gathering place in the cellar of the Old General Store.  Aptly named for the area’s prohibition-era bathtub gin.  I am old school and gin speaks to me with a special story all its own.  Cambridge knows everyone.  He introduces me to the owner Rick Hofstetter.  I am guessing he is the one who wrote the humor in The Story Inn website.  Truly some humor as dry as my gin martini.  Describing the flood of 2009, “The crew cannibalized two century-old barns to salvage barn wood siding, rusted tin metal, and pegged support beams, to rebuild the venerable tavern in only twelve days. (We are cognizant that the Old Testament Yahweh took half as long, but Rob can be forgiven for his dilatory response because he paused not to rest, but to give the old gal a hip replacement–three new support beams to protect the General Store from the further effects of entropy.”  So you see, everyone is a storyteller.

Cambridge introduces me to Jacob and Kate Ebel.  They are co-owners with Rick.  It appears Rick, like Cambridge and me, are vintage and realize the need to pass the torch to the younger generation. Jacob’s brother is Cambridge’s marketing director for his trilogy series, so the stories just compound each other.  I met Troy the Maitre d’ and Wine Director.  Very important for me to meet the wine director! It is finally time to make our way upstairs to the dinner event.  A shout calls out and it appears Cambridge is trying to make off without settling his tab.  Not really, but he needs to settle things downstairs before we go upstairs.  As I wait for him to pay his bill, I am photographing a vintage pay phone.  I can actually remember using such a phone.  Rotary dial with slots for quarters dimes and nickels.  And so we are ready for the dinner event.  It is called a beer dinner.  I did not think I was a beer person until the first pour.

A storyteller put the menu together.  Gnarly Grove Dry Hopped Cider accompanies the first taste sensation called Amuse.  I am amused at both the cider and the animation of Cambridge as he tells a few stories.  A muse is defined as a woman of artistic inspiration, and while Cambridge claimed to be inspired by our conversation, this use of the word is entirely out of the question as the inferred meaning is one who poses nude for the inspiration, so it is obviously NOT going to be part of this story. The first course is a cucumber tartare with whole grain mustard, frisee salad.  The whole grain mustard explodes on my tongue and is so beautifully paired with the cucumber.  The shy and understated Chef Eric Swanson has outdone himself with complexity of these taste sensations.  The second course features Copperhead Amber Ale.  The beer is crafted by 450 North Brewing Company, Columbus, Indiana.  In my humble opinion, snakes are good for two things, exotic covering for my boots and as an appropriate name for an amber ale.  The third course features a Duck Carpaccio and the Farmer’s Daughter Farmhouse Ale.  I am enthralled by the names of the beers and the stories behind them. At this point in the evening, Cambridge is quite animated.  It is finally his turn to talk.  He is telling me about his marketing plan for his trilogy series, his movie concept and we compare notes on the final edits.

My first encounter with Cambridge was when he agreed to meet me in Nashville to see my favorite singer/songwriters.  He gave me an assignment to read the first two chapters in his trilogy and give a review.  I made notes on the manuscript while I had a late lunch at The Story Inn in the very room our beer dinner was being held.  Fond memories. It was time for the main course of Filet Souvlaki on a bed of oregano salad with feta, chickpeas and candied lemon.  This was served with Scarecrow IPA.  Dessert was superb featuring Tiramisu along with Barnyard Yeti Winter Ale.  This was a rich espresso and cocoa beer with hints of vanilla.  No need for coffee, as this after dinner beer was the most intoxicating taste I had ever encountered.  Did I tell you I am not really a beer drinker?  Well strike that.  Whoaaaa!

12 Months at the Story Inn

It was finally my turn to get a word in edgewise.  “Cambridge, do you realize I come to the Story Inn in all four seasons.  The best time is in the off season.  I have photos of this place in spring, summer fall and winter.  They could use one of my calendars.  A photo extravaganza on the order of the excitement and enticement of this dinner event.  The Story Inn tells a 12 month story with 365 days of intrigue and invitation.  It offers something for everyone.  I have visited in the Spring and see the blossoms of Indiana with the herbs peaking up from the garden.  Come Summer, the array of the gardens astound.  Weddings are in full swing within the barn.  Fall is what Brown County is famous for.  Winter is my favorite time as it is quiet and serene.  There is a laid back atmosphere where you can get to know The Story Inn Family.  Oh the stories we have to share… We should have dropped some breadcrumbs to mark the way, because the return trip through the park in the inky blackness of the night was a challenge to say the least.  A few lefts when we should have turned right, but we made it.  Did I tell you I am night blind?  A story for another day.