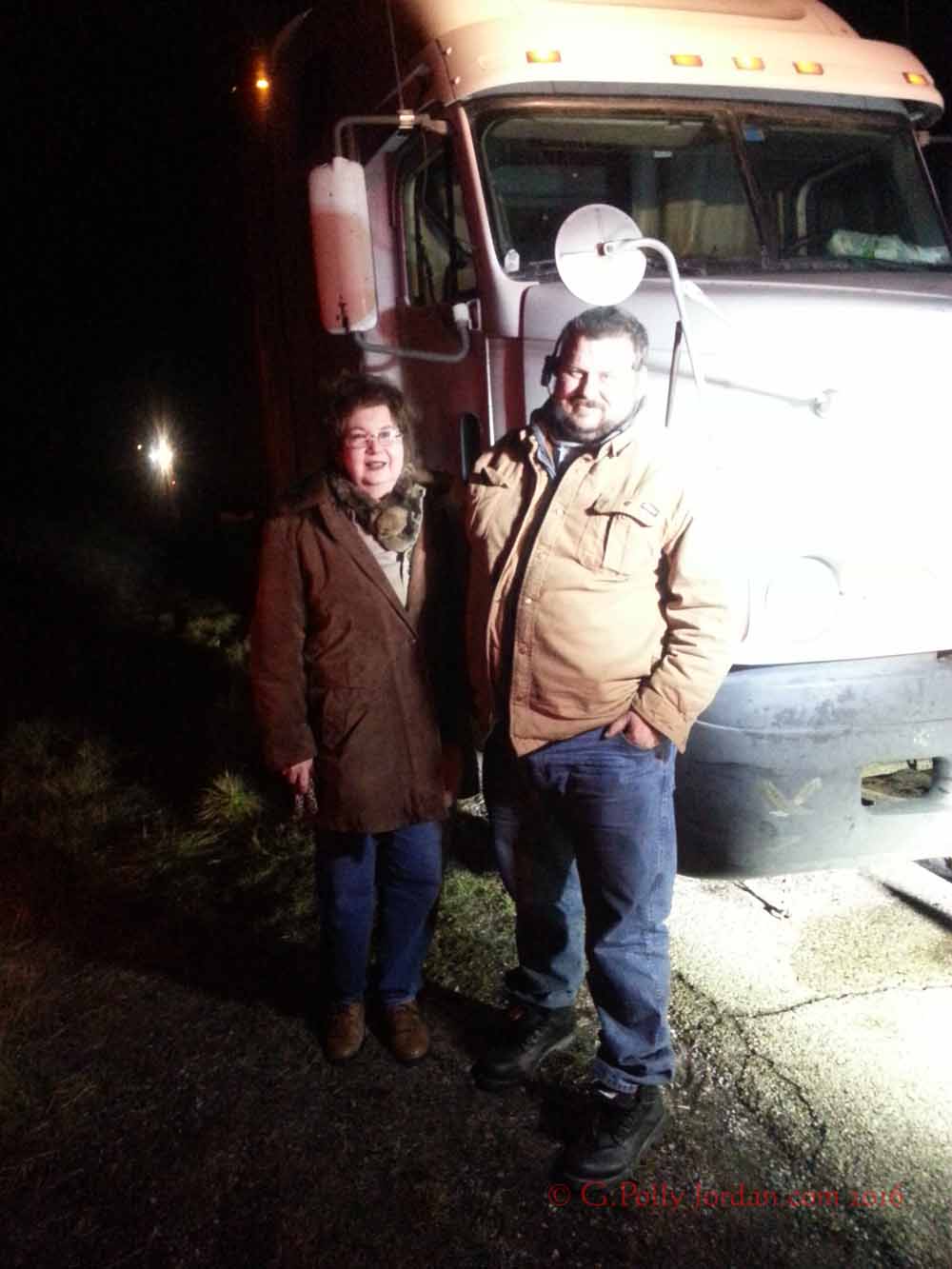 And the last four days played out this way… seven separate breakdowns, A DOT shutdown and a fire.  I learned my son was working for what is called an outlaw trucking company.  He did not know it until he got in and then he could not get out.  He gave his resignation but the outlaws would not let him return the truck.  The last DOT shutdown started a major investigation of the company and the renegade company refused to let him return the truck to Chicago and insisted he continue on to New York with his load.

Indy was to be the End of the Line

That meant he had to come through Indianapolis.  Quite fine by me because I was not letting him continue on.  Indianapolis was going to be the end of the line…one way or another.  The truck was breaking down twice a day so it was quite realistic it would die a natural death by the time it reached Indy.  I was just hoping he would make it in by dinner time so we could go to our favorite steakhouse, we affectionately call The Plastic Cow.  To ensure a proper ending to this torment arranged by Satan himself, I prayed.  “God please end this nightmare.  Get this boy safely home.  Please orchestrate a permanent solution to shut this truck down and break Robert free from these uncircumcised Philistines who are defying the armies of the Living God.”

I just looked up and smiled.  If God is for you, who could be against you?

“Mom, Jalil said he was coming with another tractor.”

“Robert, they are more than 5 hours away.  What are you supposed to do?”

“Hold on Mom, DOT just arrived.  I will call you back.” 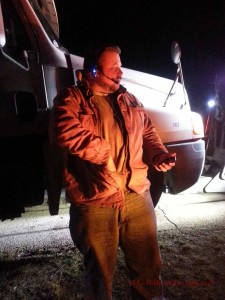 He was just outside of Terre Haute on the Illinois side.  A road trip was in order. He made it to within 70 miles from home which was just perfectly fine by me.  Sure beat having to fetch him from New Mexico.”

20 Minutes to Call a Wrecker

“Mom, DOT called Jalil and told him he had 20 minutes to call a wrecker and have the truck removed from the side of the interstate.  The wheel bearing came apart and caught fire and  melted hoses and lines to the brake chamber and melted the slack adjuster push rod.  The wheel bearing welded itself to the spindle.  The fire melted the coolant lines and all the antifreeze leaked out.  This truck is never going anywhere except the junk yard.”

“Robert, I am on my way.  I will be there in about an hour and a half.  Where exactly will I find you?

“Well Mom, I am not completely sure.  The GPS is still working and it says the closest exit is 147.  That would be toward the direction you are coming from.  It is going to be hard to find me because I have no lights.”

Well great.  He is a sitting duck with no lights and no indication of a semi sitting just off the road.  At least when I get there I can park and run my flashers until the wrecker comes.

“Robert, I just passed exit 147.  Are there any landmarks to tell me where you are.”

“Mom, I see a cell phone tower on your side of the road.  There is a sharp curve and a hill.  There is an overpass close behind me and it looks like a sign that says Martinsville.”

“Ok, I see you.  I will go to the next exit and swing around.  Do you have your reflective triangles out?”

“Yes, but they keep blowing over when the trucks pass by and the winds are really strong.”

Time for Mama to Take Action 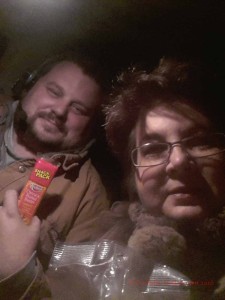 And so we sat for an hour in the dark with trucks flying by within feet of the car.  I heard enough of the one way conversation with Jalil the owner of renegade trucking company to realize no wrecker was coming.  There was no tractor replacement coming either.  Time for mama to take action.

A few phone calls later, DOT just happened to pay a visit.  They arrived just seconds before the company mechanic arrived in a pickup truck which carried no tools and no parts.  A wrecker was indeed now on the way.  When Robert showed the mechanic the damage to the wheel, the mechanic knew Jalil had played them both.  A heated exchange ensued in Arabic between the mechanic and the owner.  Jalil told Robert to give the keys to the mechanic and go on home.  Music to my ears.  They could not claim abandonment. 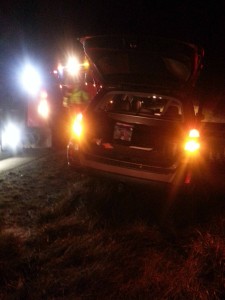 “Robert, it is time to remove all your personal items from the truck.  This nightmare is now officially over.”  I pulled the car beside the truck being thankful for 4 wheel drive and also thankful I had worn old clothes and hiking boots to work.  Heels would not have worked well on the slope and high grass off the interstate.  Bedding, clothes, food, drinks, CB, GPS, tools, log book, TV, movies, CDs were loaded in the Outback and by 10:30 pm, we were heading home.  The hostage had been released and was now free.

And as I drove, Robert played his favorite gospel tracks.  Indeed we were in the arms of Jesus! 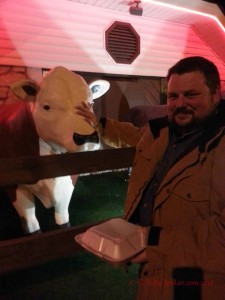 We had a few hours of reprieve before the next assault landed.  We did make it to the Plastic Cow for a few moments of relaxation.

Will Make You Pay

Text messages started flying the next day.  “Robert your truck is now repaired.  We need you to drive it to Chicago.”  Impossible.  Robert had reached the end of his rope.  Enough was enough.  That truck was not fit to be on the road and it was certainly not safe.  The renegade owner then texted “What are you a scared little mouse? Your God is your witness, I will make you pay for this.”

Time for a Documentary

Then mama decided it was time for a documentary, a 30 day chronology of events. She is a writer afterall.  Out came my notes and his log book and together we told the story of 16 breakdowns, 2 DOT shutdowns, a loss of brakes in the mountains and a fire.  Sounds a little like the 12 Days of Christmas.  There were dates, times, locations, and time lost.  We quoted every threatening text message word for word with the phone numbers they came from.  We documented every report Robert had ever made detailing the safety issues which were never fixed.  He documented all the false promises of a replacement truck enroute, reimbursement for cab fare that never came, bonus pay for Level III DOT inspections Robert passed with flying colors. And we reminded the owner the 1099 form due three weeks prior had never been received.  There was no name calling, no threats, just an honest, unemotional, professional recap of the last month.

The reply from the outlaw trucking company owner was vile.  It was written in broken English and full of cussing and curses.  Robert was called stupid, a loser and an incompetent driver.  The owner prayed to his god and put a curse on Robert and threatened retaliation for the rest of Robert’s life.  He promised to call all of the trucking companies where Robert had applied and make sure Robert would never work again.  Then he signed the email Peace!

Apparently we got under his skin in a big way. 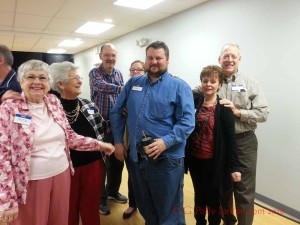 The difference between our God and his god, is ours is a God of truth.  We are people of peace. We pray for our enemies.  We pray and let God fight our battles.  We made a prayer circle around Robert at church on Sunday and reversed the curse and thanked God for what He was about to do for Robert.  We prayed for this trucking company owner that he might one day meet Jesus and learn the true meaning of peace and salvation.

Shut Down on All Fronts

Indeed the renegade made good on his threats and everyone turned Robert down for a job.  No progress was made in resolving the Florida licensing debacle and the unapplied child support payments. While the child support office has written permission plus a power of attorney to talk to me, they won’t.  But I could petition the courts and be added to Robert’s account and then they would!  They also would not allow a conference call with me on the line.  There is no assistance for one who has special needs.  The clerk’s office telephone number is busy continually and there are no other options short of showing up in person.   But how can you get there if they take your license away…except remember, it is not a valid license as it was surrendered to obtain the legal license he currently has.  An honest mistake was made in the way his payments were sent in and no help is available to straighten it out.   He is able and willing to work.  He just got shut down on all fronts.

Both of us spent Full Moon Monday in tears.  On any front in all directions the doors were slammed shut.  I had nothing up my sleeve.  No new ideas to try.

God just loves it when we realize our total dependence on Him.  Once again, that is where we find ourselves.  Instead of being anxious and hoping God will answer,  I began thanking Him for the solution I knew He would provide.

Robert got the nerve to tell his uncle and cousin what happened.  He forwarded them the caustic email reply from the outlaw owner and this set them into action.  They arranged for an interview the next day. A friend of the family had a trucking company and was in need of a driver.  Could I bring Robert and meet them half way to Elkhart.  I raced home from work, we quickly packed the car with all Robert’s belongings.  We had faith he would need everything with him as we felt sure Devine intervention was at work and Robert would be back in a truck soon.  We drove north as his cousin drove south and met in the middle.  And in an instant, he was gone.  I cried all the way home.  It had been five days of high level frenzy.  Now we needed to let God work unhindered and unassisted.

I had one page left in my journal before a chapter divider that always signifies a major change in direction.  Rather than wait to see how the story ended and then writing about it, I wrote the ending. Deep into the night I gave thanks to God for the job He was going to provide for Robert.

After a nerve wracking day of waiting for the word to rejoice, Robert sends a text.  “I can’t talk but I can text.  I got a job.”

It was not the semi driver job he wanted, but it was the job God thought was best.  He lost his voice overnight and that is why we could not talk.  The semi driver job ruled him out due to his short term experience.  His cousin convinced his company to hire him on the spot.  He leaves in the morning hauling travel trailers across the lower 48 and Canada.

And mama is staring a new savings account to buy a semi truck for Robert’s dream.  Got to have a dream, for how else do you have a dream come true!