On the road again after the brief 48 hour visit and 20 year reunion, Robert was headed to Chicago for truck repair. Antifreeze poured out as fast as he poured it in.  His load to Chicago cancelled after he waited around all day putting him in Chicago in time to be put in a hotel while they worked on his truck overnight.  The next day he was on the road at 4 am to pick up a load in Richmond, IN bound for the state of Washington.  He lost his brakes again and this time they dynamited themselves and Robert came to a screeching halt and that was all she wrote.

“Robert where are you?”

Robert asked the mechanic “Sir, can you tell me what city I am in.”  “Mom, he says I am in Warren, Indiana.”

“Robert, that is on I-69.  Why on earth would you be on I-69 going northeast when you need to go northwest to the state of Washington.”

“Well mom, that is the way the GPS took me, but I had someone help me check it out and it got set to what is called the longest route.”

“Robert, you can’t be serious, is there really a setting to go the longest route?”

Navigational Grace in a Northwesterly Direction

Somehow the brakes got fixed AGAIN, DOT came to investigate this second offense and by the navigational grace of God, Robert got headed in a northwesterly direction.  For three days he drove hard and made it to Washington.  This was the longest stretch with no break down and limited mishaps.  It would not last.

Robert makes friends everywhere he goes.  “Mom, I met the nicest lady Ruby at the Sundance Weigh Station.  She gave me a perfect score on my DOT Level 3 exam.  You know I get paid $100 bonus when I pass these tests at the weigh station.  She and I got to talking and she knows the owner of the company I work for.  She actually remembers shutting one of his trucks down and she told me about the fight that took place when the owner Jibril came to claim the truck.  I told her the next time I was passing through her weigh station, I would stop and pick her up a cup of coffee and we would have a nice little visit.  Mom, she likes her coffee with cream and a lot of sugar.”  I shake my head, look up and smile.  God puts angels everywhere.

I am thinking this is no surprise that a company that only owns 20 trucks is well known in a weigh station in Wyoming.  In fact ole Jalil is well known to a maintenance facility in Georgia where DOT issued the company 13 citations when Robert lost his brakes in the mountains of Tennessee.  I was delighted to learn the little old lady in Sundance Wyoming insisted Robert take her email address and she gave him a number to call if he was ever put in danger again.  He has that number on speed dial!

The semi truck load of bottle caps made it to the destination on time.  He got a load of potato chips to go to Walmart in New Mexico.  “Robert you are going to have to ride like the wind to get that load delivered on time.”  We reviewed the mileage and made a plan and discussed how he needed to get up at the crack of dawn and drive one of his longest days yet.  “Mom, those big drop offs on the side of mountains, are those called canyons?”  These mountain journeys always seem to be at night.

High Winds Across the Canyon 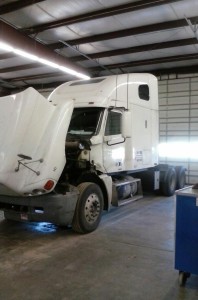 I knew there was trouble when there was no communication all morning.  A picture flashes on my phone of a truck with an open hood and the caption said “look where I am again lol.”  The story started the night before right after we discussed that a canyon was a deep gorge or ravine that is located between cliffs and it carved into the landscape by the erosive activity of a river.

“Mom, right after I hung up from you I saw police lights ahead.  I slowed down and moved to the passing lane as there is a new law now that says you have to move over when police are stopped by the side of the road.  The cop got an attitude with me because he was trying to get me to pull into the rest area.  I told him I was just trying to follow the law and protect his safety.  He yelled and screamed at me so  I just asked for his badge number and said we were going to call this in because I was not going to be disrespected like that.”

“Oh dear Lord, Robert why would you do this?”

“Because there was no reason for this sort of talk.  He finally got calmed down and we came to terms.  He then set up a road block so I could back up in order to get into the rest area.”  “Robert, why did he want you to pull into the rest area in the first place.”  “Well mom, the winds were whipping in and out of the canyon so badly they would have blown me off the road.  I have a very light load of only 7500 pounds because I am hauling nothing but potato chips.  The police were shutting down the road.  I spent the night in the rest area and awoke to the smell of diesel fuel.”

Seems that his fuel pump sprung a leak and 300 gallons of diesel fuel was now on the ground and encircling a nice fancy truck next to him.  Robert knocked on the truck door waking the trucker to warn him he might want to move his rig before he caught on fire.  I was thinking this would be fine time to call that number Ruby had given to Robert in Sundance.  Imminent danger. 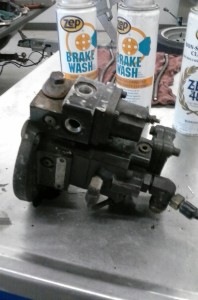 The fuel pump had to be overnighted to La Grande Oregon.  Robert had a free day holed up at the Royal Motor Inn.  By this time it is my lunch hour.  “Robert, today is the day you are going to get a new job.  I want you on the phone the rest of the day.  I am going to send you trucking companies and phone numbers.”  I said a prayer (actually I pray all day and night so I said a really BIG specific prayer) and started researching trucking companies who would take a green bean with three months of driving experience.   After all, he has had every experience in those three months, he did learn to drive on the grounds of a mental hospital and he does demand respect from cops who are screaming at him.  Ruby says his logs are a work of art and he continually gets perfect scores at every DOT check point.  He is however a package deal.  He comes with his side kick mother and his Wing Man lives upstairs.

What is Our Address?

Eighteen text messages were sent.  I check his email and see he must be making calls because trucking companies are sending him emails.  I figure I will be helping him complete online applications once I get home from work.  This was not at all what I had planned.  He texts me “what is our address?”  hmmm…

Finally he calls and says, “Well mom, I got a job.  I go to orientation on the 22nd.”  I figure we had miles to go before this is official but then I look at his email and see a bonafide job offer with directions to orientation.  Mom, they guarantee 2500 miles per week.  They have benefits after 90 days.  It is a W-2 job so they will take care of the taxes.  And after I drive one million miles safely, they will give me a bonus of $5000.  “Robert do you know how long it takes to drive one million miles at 2500 miles per week…it will take you 8 years.”  We did rejoice at the prospects of him driving a truck that is only two years old.  Sure glad I have that birth certificate and social security card in hand.

Can’t Get Home From Here

As we calculate where he is (broken down in the middle of nowhere, Oregon) and where he needs to be by the 22nd, it is impossible to meet the deadline.  He knows other drivers who quit this company have just left their rigs at a truck stop with the keys in the ignition.  For sure no one would steal one of these trucks and even if they did, you would be broken down in a short radius.  “Mom, I could never do that.  I have to get this truck returned to Chicago but first I have to deliver this load to New Mexico.  I am sure I will have to bring another load from New Mexico to Chicago otherwise, Kalil will charge me for the fuel.  I need to at least wait until Friday to give my notice because I imagine he will not pay me again once he knows I am quitting.

And then God took the wheel (as if he was not calling the shots the entire time.)  The new company called Kalil and asked for a reference.  And that is how Robert gave his notice without meaning to.  Kalil was very sorry to lose Robert as they all liked him.  He gave Robert a great reference calling him one of their best drivers.  Robert said he wanted to do the right thing and handle this professionally.  Stay tuned.

Trucking companies are continuing to woo Robert from the multitude of calls he made yesterday.  He was able to get a new job with a few phone calls in a single afternoon and will be making more money than I do. I guess I need to start doing what he tells me and get my CDL.  He says I have potential to get a good job in transportation judging by how quickly I learned to manage his trucking career!  Did I mention that one of my “immeasurably more” prayers was to go on road trips to enlarge my photography collection (I need some canyon picutres.)  I told God I needed these road trips financed.   Wow when you pray and then give it to God, in his own time and place He will deliver…immeasurably more than you could every ask or imagine. Eph 3:20